Titleist is the Number 1 Ball in Golf

The 2018 U.S. Open Championship will be played this week at Shinnecock Hills Golf Club in Southampton, New York, on Long Island,

beginning with the first round on Thursday, June 14th. This will be the 118th playing of the U.S. Open Championship, and the fifth at Shinnecock Hills. Brooks Koepka is the defending champion, winning last year on a soft and wet Erin Hills course with a winning score of 16-under par 272, tying the record. Look for scores to be a lot closer to par this year.

The U.S. Open Championship, which is one of the most open of all golf events in the world. 9,049 players from all over the world signing up to, or at least attempt to, play in the U.S. Open. There were 112 local qualifying locations around the U.S. and Canada, with 500 players advancing to sectional qualifying, where they would join 360 players who were exempt from local qualifying. Twelve sectional qualifiers were held, including one in England and one in Japan, and 78 players advanced from those to compete against an additional 78 exempt players to make up the total of 156 players who will meet at Shinnecock Hills to compete for the championship.

Originally designed as a 12 hole course by Willie Davis, and later expanded to 18 in 1895, Shinnecock Hills became the first incorporated golf club in the U.S. in 1891, and three years later Shinnecock became a founding club of the USGA and hosted the 2nd U.S. Open Championship in 1896. The course was revised four times before the present course, designed by William Flynn, was opened for the 1931 season. Shinnecock has hosted a total of four previous U. S. Open Championships, hosting its second 90 years after the first, in 1986, and also the 1995 and the 2004 championships. In 2016, Shinnecock underwent a major restoration to bring back some of the original angles of the course. 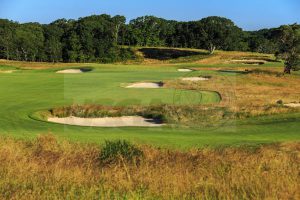 The opening hole plays from an elevated tee near the clubhouse. Players will find that the fairway narrows dramatically as it nears the two fairway bunkers on the right side of the drive zone – from 47 yards wide at 275 yards out, to 30 yards wide at the 300-yard mark. Under certain wind conditions, some players may try to hit driver close to or onto the green. It’s a birdie opportunity, but a player could easily make a quick bogey as well.

This hole has been lengthened by 26 yards since the 2004 U.S. Open to restore the challenge presented by architect William Flynn; a par 3 that requires a long-iron shot. The prevailing wind from the southwest would be slightly helping and from the left, and most of the players will hit a 4- or 5-iron, depending on the wind and the hole location. The green is open in front, although there is a slight upslope just short of the green. 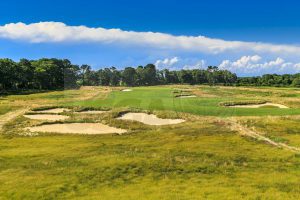 As was the case at the 2nd hole, the prevailing southwest wind would be favoring the players and from the left. A new tee has added 22 yards to the hole, and is farther to the left, and the fairway was also tightened on the left to make the angle of the dogleg more pronounced. The fairway is still relatively generous at 33.5 yards at 300 yards from the tee. A bunker on the right side of the landing area is unlikely to be in play, unless the wind changes direction.

The tee shot and approach shot will typically play into and a right-to-left wind on this hole that has been lengthened by 40 yards. The left side has been brought in so the fairway measures 32.5 yards wide at 300 yards out, which brings the fairway bunkers into play. The best angle of approach is from the right side of the fairway, unless a hole location on the right side of the green is used. The slightly elevated green has some subtle movement.

This hole has been lengthened by 52 yards, but the prevailing wind is helping, so players could have an opportunity to reach the green in two. The carry distance to the left-hand fairway from the tee is about 250 yards. The green sits slightly above the fairway and is surrounded by closely mown turf. Because of undulations that can move the ball away from the hole, the effective size of the green is much smaller. This hole is still likely to be a good birdie opportunity and should play under par.

This hole features a blind tee shot, and although the tee shot is typically into the wind, it’s only a 240 yard carry across the bunker on the right side of this dogleg-right hole. Players who favor the left side to avoid the bunker and the natural sandy area on the right will face a longer approach shot from a less desirable angle, while also bringing the bunkers on the left into play. The approach shot is to a green that pitches from back to front.

A classic representation of the Redan hole at North Berwick in Scotland, this hole features a green that slopes from front right to back left, requiring precise distance control. The prevailing wind is typically against the player and slightly from the right. The back left bunker will likely catch quite a few tee shots. Players who miss the green long will face a shot back up the slope, and a ball not hit with enough force could roll back toward them.

This hole has been lengthened by 41 yards since the 2004 U.S. Open. The tee shot is to a generous fairway, although players who successfully challenge the bunkers on the left will leave themselves a better angle of approach to the green. The prevailing wind is against the player and from the right, but some players may still choose less than driver from the tee. Like most of the greens at Shinnecock Hills, this putting surface rolls with the surrounding topography. 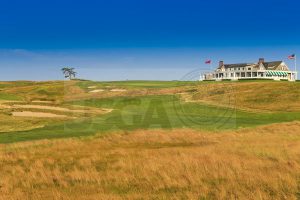 On the finish to the outgoing nine, players should encounter a right-to-left breeze on a blind tee shot to a fairway with a lot of undulation. Tee shots that do not reach the bottom of the hill could leave players with an uneven lie for the uphill approach shot, where the player may only see only part of the flagstick. Carrying the approach shot to the green is a must, but those who end up over the green will face a tough downhill shot.

The player faces a decision from the tee: hit a shot of about 220 yards to a plateau, leaving a relatively level lie, or drive it over the hill. Distance control is critical on the approach shot, whether from the top of the hill, or with a shorter club from the bottom or even part of the way down the hill. The approach is typically downwind, to a green with a closely mown area behind it.

One of the most demanding short par 3s in golf features a very small green that slopes from the back left to the front right. The breeze is typically from left to right and slightly helping, and if the wind is up, the degree of difficulty increases. The middle bunker on the right catches a lot of tee shots. Shots that end up long and left of the green will leave a very difficult shot down the slope.

This hole’s length is unchanged from 2004, and some players may choose less than driver from the tee, as the fairway measures only about 30 yards wide throughout the landing area. The approach shot is to a fairly large green that features some interior ridges that add strategy and difficulty to the hole. The restoration of the course brought back part of the green that had been lost over time. 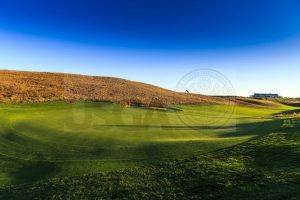 Another hole that hasn’t changed much since 2004 will offer a potential birdie opportunity, although it has the least generous fairway on the course, at just 16.5 yards wide 300 yards from the tee. Many players will choose to lay up from the elevated tee, as hitting the fairway here is critical, leaving themselves a short club into a green that features a lot of movement. The bunker at the front right of the green can snare an approach shot.

This hole has been lengthened by 77 yards, restoring it as the long par 4 it was designed to be. There is a dramatic drop in elevation from the tee to the fairway, which pitches from right to left. The best angle of approach is from the left, as players who find the left rough could chase the ball 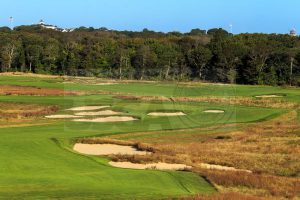 onto the green through the narrow opening. The second shot plays slightly uphill to a green that pitches gently from back to front, although it does fall off at the back.

This hole also features a significant drop in elevation from the tee to the fairway. Most players will drive over the ridge that runs across the fairway, leaving them with a short iron approach into a green with several accessible hole locations, except for the front, which is protected by bunkers. The prevailing breeze is from the left and slightly into the players. Those who find the fairway, which gradually narrows between 250 and 350 yards, should be left with a good birdie opportunity. 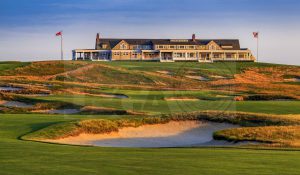 This hole has been lengthened by 74 yards, and with the prevailing wind into and from the players’ right, it is likely to play as a three-shot hole. The winding fairway will require the players to choose proper angles. Many players will play their second shot short of the bunker on the right, about 100 yards short of the green. Those who attempt to reach the green in two, or are left with a long approach after finding trouble off the tee, will be tested by a narrow and well protected putting surface.

The recent major change to this hole is the restoration of an area of the green at the back left, which gives an area to add a hole location. The prevailing wind is from the players’ left, and when factored in with the angle of the green, means this hole requires a very precise shot. Player who bail out to the right could find themselves in the bunker, because the angle of the green and the wind will exaggerate the miss. 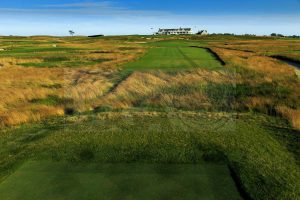 The finishing hole features a new tee that adds 35 yards and creates more of a blind tee shot. The prevailing wind is from right to left off the tee, with more of a favoring wind on the approach shot. The preferred angle to the green is the right side of the fairway, both for a better look at the green and a better angle of approach, although players are likely to only see part of the flagstick. The green has a good amount of slope from back to front.

Live Streaming Coverage from the USGA

Golf Talk Times is a participant in the Amazon Services LLC Associates Program, an affiliate program designed to provide a means for websites to earn fees by linking to Amazon.com and its partners.